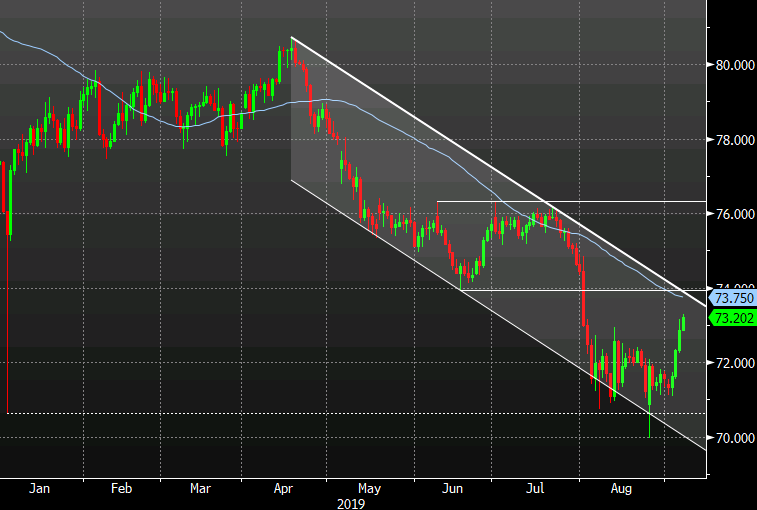 The Australian dollar has been in a swan dive since April as the trade war ramped up, housing worries intensified, global growth slowed and the RBA cut rates.

It may have overshot. The late-July/early-August rout had some of the hallmarks of panic selling. Aussie sentiment was already extremely weak and it was hit by the news of fresh tariffs. During that time AUD/USD fell in 11 straight sessions. That’s not a balanced market.

After a dip to 70.00 two weeks ago, AUD/JPY finally found a footing in what was an impressive intraday turnaround following the RBA and news of US-China phone calls. The China news was mocked at the time as inconsequential but it turned out to be a prescient signal because top-level meetings were announced this week.

As usual, the technicals were ahead of the move.

This week, the pair made a powerful move to the upside and took out the mid-August high in a four-day rally. That was probably the easy part. It relieved oversold conditions and shook out some weak hands.

Now is the tough part. The pair is 50-80 pips away from a series of tough levels including the June low, the downtrend and the 100-day moving average.

The mood right now in markets is optimism and until something changes I believe we will see that expand and consolidate. Despite the fears of August, economic data in most of the world is fine. This week we get the ECB decision and that’s a main risk.

Here is the rest of the leaderboard from last week: